India-Pakistan are the matches that even those people who don’t like cricket watch. There are very few things in life that are as intense as the cricket rivalry between India and Pakistan. This rivalry, like most great rivalries, have their history in politics and thus every time they face each other, it is an all-out war. As tensions grip these cricket loving nations and people get ready for the two innings that guarantee to be a nail biter, here’s a look back at all the India vs Pakistan World Cup Matches so far!

Context matters when it comes to rivalries. India and Pakistan haven’t faced each other since 2012, except for multi-team tournaments. In the meanwhile, we have seen Pakistan turn from one of the best cricket teams in the world to a team that barely wins anymore. India’s story has been the exact opposite. The past two decades have simply been the golden age of Indian cricket. But if we look at the history of India-Pakistan cricket, there have been some iconic one-to-one battles, like Sachin Tendulkar vs Shoaib Akhtar, Virender Sehwag vs Saqlain Mushtaq and not to forget, Anil Kumble taking down the whole Pakistan team on his own in 1999.

India has gone up against Pakistan 7 times in the World Cup, winning all of them! In T20 World Cups, India faced Pakistan 5 times, beating them all 5 times as well. In all these years, there have been some truly iconic matches in these World Cups.

India beat Pakistan in the second quarter-final of the 1996 world cup. The moment when Venkatesh Prasad took Aamer Sohail’s wicket and gave him a strong send-off is still sealed in all cricket fans’ minds. It was a dominating win for India but what happened a few days later, no one saw it coming.

Sachin Tendulkar was the Player of the Series in this World Cup, and if you remember this match, you already know why. Think about it- Wasim Akram and Shoaib Akhtar with the ball for Pakistan, Sachin and Sehwag opening for India- a battle that would have everyone licking their lips. Sachin’s onslaught of Shoaib Akhtar’s bowling is a treat to remember. It started right from the second over of India’s chase. In the last three deliveries of that over, Tendulkar hit Akhtar for a 6,4,4. And who could forget that iconic upper-cut six that he hit off Akhtar’s bowling. However, Akhtar managed to take Sachin’s wicket when he was on 98.

India became the champions in the first ever T20 World Cup tournament by beating arch-rivals Pakistan. Although India gave Pakistan a target of 158 with Gambhir scoring a crucial 75 runs off 54 balls. Despite not building any strong partnerships, Misbah-ul-Haq was keeping Pakistan’s hopes alive till Indian skipper MS Dhoni did something unpredictable. Dhoni handed over the last over to Joginder Sharma who pretty much won India the cup. 6 runs to win and Misbah hits a paddle shot caught by Sreesanth and the celebrations begin!

Playing at home, India was one of the favourites going into ICC World Cup 2011. It was Sachin’s last world cup and the pressure was on to win him the trophy. To add to that, facing Pakistan in the semi-final. India won the toss and elected to bat. The Master Blaster scored 85 runs thus securing a target of 261 for Pakistan. Wahab Riaz hurt India with his 5 wicket haul but the match was far from over. Starting out steadily with Mohammed Hafeez scoring 43 runs off 59 balls, the wickets tumbled. Despite Misbah’s 56 runs, Pakistan lost the match. 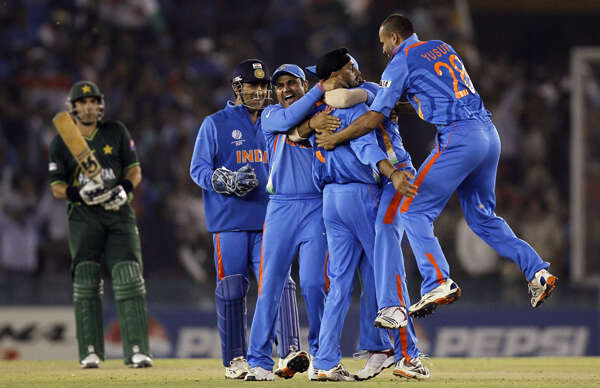 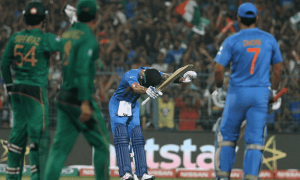 India and Pakistan yet again squared off for a nail-biting encounter when they played each other at Kolkata. There was immense pressure on India after a humiliating loss to New Zealand in the first game. Not just that, there were also many high-profile names in the stands, supporting India in a full-capacity Eden Gardens.

For a while, rain added to the anticipation as the game was shortened to 18 overs each. Pakistan batted first and put up a total of 118/5 which looked like an easy chase. But in reply, Mohammad Amir and Mohammad Sami broke the back of India’s batting with 3 early wickets. Then, Virat Kohli took charge of the chase and scored a brisk half-century on a spicy pitch, to take India home. Kohli bowing to Sachin at the end (who was in the stands watching the game) was the one moment we’ll never forget.

Are you excited for the next India-Pakistan face-off (which will probably be at the 2021 Asia Cup)? Who do you think will win this time? Let us know in the comments below. #BleedBlue!

Selfies — The Best Way to Show-off Your Self-expressions

Hobbies that pay off: Enjoy & Earn

Do You Know About These Top Banned Foods Around The World?