This friendship day, we bring you a list of 11 fictional friendships that will take you back to school (or college) days and to forgotten friendships, far from the hi-tech world where friendships have boiled down to connecting over the phone, Whatsapp or Facebook.

Psst, don’t forget to call your best friend(s) after you’re done reading this. Surely, there is virtual hugging and reminiscing to be done.

Grab some popcorn, sit back and enjoy. So, here we go:

11. Pooh and Piglet (Winnie The Pooh)
Unlikeliest of friends in an unusual place. You don’t necessarily need to be born courageous, sometimes it’s your friends who instill that into you. Pooh and Piglet are a fine example of that.

Pooh and Piglet were not only best buds but also used to wordplay like a pro or call it Rabbit’s misfortune!

10. Jon Snow and Samwell Tarly (Game of Thrones)
Because The Rembrandts “I’ll be there for you” was made for these two.
It’s refreshing to see something like a Jon-Sam friendship in a show like Game of Thrones where brutality and deceit run rampant.

And remember this? Touch Sam again, I dare ya..I double dare ya.
You don’t mess with Sam because he’s friends with Jon who has a pet direwolf!

9. Frodo Baggins and Samwise Gamgee (Lord of The Rings)
Well, everyone needs a Sam, especially when you’re Frodo Baggins.

In friendship, you don’t ask for perks because they come naturally.
Ladies and Gents I give you, Samwise Gamgee ‘the wingman extraordinaire’!

We’ve all had this never-ending journey through the galaxy with our best friends in a fast-travelling ship, right? No? Then, you know why these two’s friendship is so special. Han Solo and Chewbacca literally define the word “friendship” with their adventures in a galaxy far, far away.

7. Superman and Batman (Justice League: The Animated Series)
Although they fought over ideology in Frank Miller’s The Dark Knight Returns or Zack Snyder’s Batman v Superman: Dawn of Justice, The Man of Steel and The Dark Knight are best buds. You can always find time for some hugging in between all that crime fighting and saving the day. Come on Bruce, lighten up a little!

6. Sherlock Holmes and John Watson (Sherlock, BBC)
This BBC crime drama not only strengthened the unique bond Sherlock Holmes and John Watson have but offered a fresh and modern perspective of their camaraderie. The result? Elementary, my dear Watson. One of the most beloved TV series ever. Although the fans had to wait a long time between the seasons.

5. Steve Rogers and Bucky Barnes (Captain America, Marvel)
Everyone who has watched Marvel’s Captain America trilogy knows what I’m talking about here. Steve and Bucky go way back when Steve wasn’t the super soldier he eventually becomes. The rest, as they say, is history. This friendship can take you on a feels trip like never before. *lies down..tries not to cry…cries a lot*

And how we feel when they say “I’m with you ‘til the end of the line, pal.” *Ohh, so adorable*

4. Amar and Prem (Andaaz Apna Apna)
One of the greatest cult movies India has ever produced gave us this pairing. Amar and Prem never fail to amaze with their weird mannerisms, quips, and wisecracks. Theirs is a friendship that was built upon chance but goes from strength to strength there on.

3. Chandler Bing and Joey Tribbiani (F.R.I.E.N.D.S)
All of the 6 friends shared quite an inexplicable bond but it was the Joey-Chandler friendship (or “Chanoey” as we like to call it) that stole all the limelight and for all the right reasons. Look at all those hugs, Hugsy you better take notes!

From solving cases together to Charles always having Jake’s back, Brooklyn Nine Nine has probably the greatest fictional friendship of all. You couldn’t ask for a better sidekick than Charles Boyle but Jake Peralta has shown it time and again that he is willing to do anything for Charles.

Scooby and Shaggy: Ruh-Oh! You thought we are going to forget this brave duo? They bond over something that all true friends bond over: Food (and naps)! Shaggy and Scoobs have been friends since..forever. They love food and they turn pale when they see anyone with a mask.

Timon And Pumba: Hakuna Matata, what a wonderful phrase! It means no worry for the rest of your days. It is a problem-free philosophy. And that is exactly how Timon and Pumbaa live their life. No worries, no pressure, and unlimited fun!

Legolas and Gimli: If you want more proof that friendship doesn’t require anything else except love and to have each other’s back, Legolas and Gimli are your perfect examples. Dwarves and Elves hate each other and have been fighting for years. But what did G-L say to enmity? “YOU SHALL NOT PASS!” 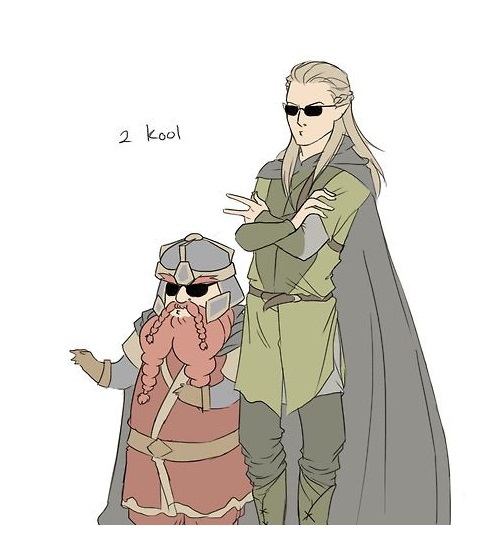 Dory and Marlin: Friendships are all about love, trust, care and a bit of emotional support. No matter what their flaws, Dory and Marlin are the most aww-dorable!

Ohkay, is that a fat little tear from the corner of your eye, we see? We know that you are missing your bffs right now. Just gift them something this friendship day. And tell them that they mean the world to you. *Runs to hug friend*

So You Want to Travel? Get best Offers!