Though many would argue that in India, cricket is played on every road, every street, and every yard of space available, the best of cricket is played in stadiums. Now, there are so many great cricket stadiums in the country that you shouldn’t even bother to count how many. And no matter where you live if you and your family are avid cricket fans, then, you must have gone to one of these stadiums at least once.

Between the razzle-dazzle and commerce of the player auctioning, opening and closing ceremonies, controversies and the pure art of the game itself, it’s easy to let the venue of the match go completely unnoticed. If you did take a moment to appreciate some of the best cricket stadiums in India, you would know that many of these host stadiums have a history and have made some supremely iconic moments in cricket history possible.

The Best Cricket Stadiums in India in 2022 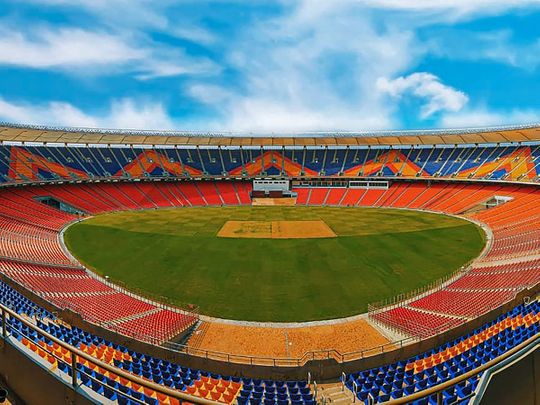 The new heart of cricket in India, the Narendra Modi Stadium in Ahmedabad is the largest cricket stadium in the world. Earlier known as the Sardar Patel Stadium, it was renovated in 2020 into a world-class sports complex and started by hosting a Day/Night Test Match between India and England. Not just that, it is also slated to host this year’s IPL final. But despite all the high-profile games to have happened, this work-of-art is yet to see a full-capacity crowd.

When you come here, you get absorbed in a sea of orange, between the ring of lights. The ground itself is quite balanced and has seen some iconic moments like England’s 81 all out in the D/N test, Rishabh Pant’s reverse scoop off James Anderson on the way to a swashbuckling century, and Axar Patel’s 20 wickets in two test matches here. But this is just the beginning. Surely, there are many more amazing moments to come.

Fun Fact: The Stadium actually kicked off as a venue for American President Donald Trump’s visit to India and saw a big rally called ‘Namaste Trump’ being hosted here on 24th February 2020.

India’s oldest, most checkered stadium set in the midst of the old-world charm of Kolkata, also happens to have hosted some of the most iconic moments for cricket fans. Built in 1864, India’s first-ever cricket stadium, with a hosting capacity of 80,000 people at a time remains irreplaceable in the history of Indian cricket for reasons far beyond its age and size. Bringing back the pain of the lost semifinal in 96 with Sri Lanka following the closely fought victory against Pakistan, AND the memories of triumph and pride thanks to V.V.S.Laxman’s 281 against Australia, claimed to be the greatest Test performance of the last 50 years.

Fun Fact: The only cricketer to ever achieve a hattrick in an ODI at Eden Gardens, was the all-rounder Kapil Dev in a match against Sri Lanka in 1991.

Though it lacks the historic charm or mystique of some of the older stadiums, Wankhede stadium, often considered as one of the best cricket stadiums in India, is an empire that has built its history through the quality moments produced in the stadium. Sunil Gavaskar’s last appearance for India, India’s chase for 256 against England in 2002, the highest runs-per-over quotient in international cricket in 1987, and the most media-covered event of all, Sachin’s last test followed by his teary-eyed farewell speech, all took place over the green grass/blades of Wankhede. Located in a city that’s always busy and densely celebrity-studded, is also arguably the most prolific producer of Indian cricketers. This is the home ground of Sunil Gavaskar, Sachin Tendulkar, Rohit Sharma, Ajinkya Rahane, Ravi Shastri, Kambli, and many more iconic players. A relatively new-age stadium, built in 1975, held a capacity of 44,000 seaters when built and can host 38,000 audiences today. It covers a vast area of 35,000 square meters and is traditionally batsmen and spinner friendly.

Fun Fact: The Stadium stemmed as a result of a mundane yet long disagreement over seating capacity between the Bombay Cricket Association and the Cricket Club of India, following which a politician and then BCA secretary, SK Wankhede took upon himself to find a new construction venue. 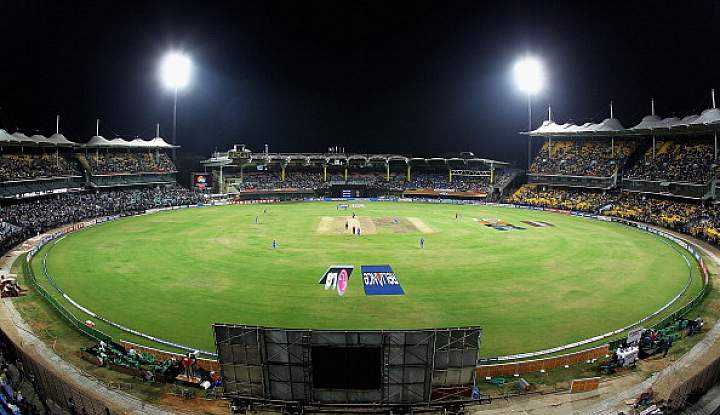 Established in 1916, and formerly known as the Madras Cricket Club Ground, it is the home ground to Chennai Super Kings in the Indian Premier League since 2008. If Kolkata has history and Mumbai has pride, Chennai has the most knowledgeable fans around. It might not be the best Cricket Stadium in India, but who can forget Sachin’s near-perfect 136, an innings in which he battled not just a brilliant Pakistani attack but also his own body. And who can forget how the entire stadium put aside its disappointment to warmly applaud the victorious Pakistani team. For all the history that Chidambaram and India-Pakistan cricket boasts of, this might still be the most beautiful sight they have given the cricketing world.

Fun Fact: The fastest triple century in test history was hit in 2008 by Sehwag in 278 balls against South Africa on the Chidambaram pitch. Sehwag was also just the third batsman to score two triple centuries in Test cricket after Donald Bradman and Brian Lara. 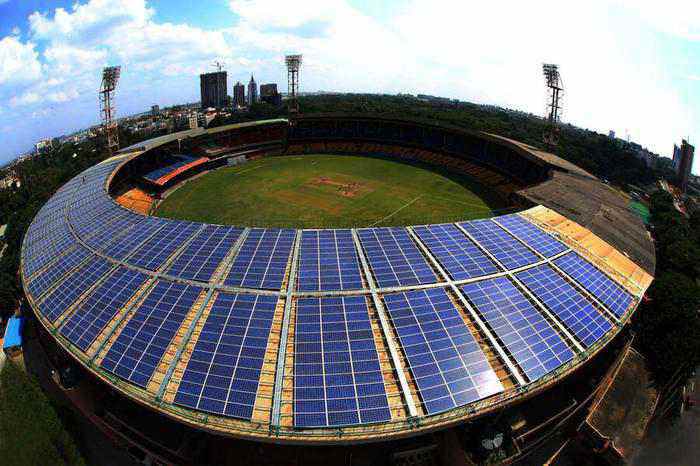 Established in 1916, and formerly known as the Madras Cricket Club Ground, it is the home ground to Chennai Super Kings in the Indian Premier League since 2008. If Kolkata has history and Mumbai has pride, Chennai has the most knowledgeable fans around. It might not be the best Cricket Stadium in India, but who can forget Sachin’s near-perfect 136, an innings in which he battled not just a brilliant Pakistani attack but also his own body. And who can forget how the entire stadium put aside its disappointment to warmly applaud the victorious Pakistani team. For all the history that Chidambaram and India-Pakistan cricket boasts of, this might still be the most beautiful sight they have given the cricketing world.

Fun Fact: The highest number of runs scored on this pitch by a batsman is 534. Not particularly surprisingly, the record is held by Sachin Tendulkar, scored in a One Day International match.

Anil Kumble. 10-74. Enough said. Well, not really. There is this weird combination of effortless nonchalance and manic energy that only the Delhi crowd can manage, making it one of the best Cricket Stadiums in India, that also describes Sehwag. The Stadium has been in existence since 1883 and is the home venue to the Delhi Capitals of the Indian Premier League. The second oldest international cricket stadium after the Eden Gardens has hosted its first test in 1948 (India v West Indies) and the last test in 2017 (India vs Sri Lanka). It had to take a hit on its reputation as an International Venue when the ODI between India and Sri Lanka was canceled as the pitch was declared unfit to host the match in 2009 and was banned for 12 months by ICC. All has been well since it made its comeback as one of the hosting stadiums for the 2011 Cricket World Cup. But then, as I said, Kumble – 10 for 74. Go on, watch it again on YouTube. We know you will.

Fun Fact: As of 2016, this pitch has hosted the Indian national cricket team for over 28 years in Test matches and for over 10 years in ODI matches, and India came out victorious in every single one of those.

Ekana Cricket Stadium, also known as Bharat Ratna Shri Atal Bihari Vajpayee Ekana Cricket Stadium, is an international standard cricket stadium in Lucknow, Uttar Pradesh. It is a public-private partnership stadium. It’s India’s fifth-largest international cricket stadium, with a seating capacity of 50,000. It also happens to be one of the most technologically advanced of its kind, boasting cutting-edge facilities for players, officials, VIPs, fans, and the media. Home to Lucknow Super Giants of the Indian Premier League, it features a bowl design that brings its spectators closer to the action than ever before. The Board of Control for Cricket in India (BCCI) approved it as the Afghan national cricket team’s third home ground in India in July 2019.  The stadium hosted its first international match on November 6, 2018, a Twenty20 International (T20I) between India and the West Indies, becoming India’s 52nd international cricket venue. Then, it went on to host all of the matches in the 2019 Afghanistan vs. West Indies series.

Fun Fact: Compared to all the other stadiums in India, Ekana Cricket Stadium boasts of the longest straight boundaries. That means players not only need to time the shot properly but also need to give them the right power to secure a straight 4 or 6.

The list is placed in no particular order and is the 7 most widely accepted picks for the Top 7 stadiums. So, when you’re watching the upcoming IPL season, and some interesting events unfold on the creases of these stadiums, hope you get to appreciate them a wee bit more in the context of the history of these legendary venues.

Which is the Best Cricket Stadium in India according to you?
Let us know in the comments below :) 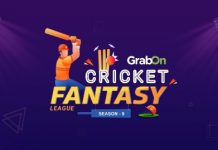 Thrift Guide to Go on a Smooth Shopping

So You Want to Travel? Get best Offers!