Here are our favourite/best inspirational quotes from Hollywood

1. “Hope is a good thing, maybe the best of things, and no good thing ever dies.”
-Andy Dufresne, The Shawshank Redemption 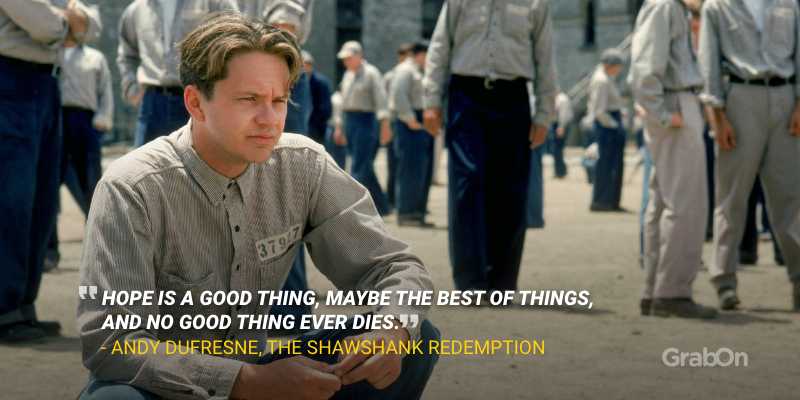 Considered to be one of the best Hollywood movies of all time, The Shawshank Redemption had some of the most inspiring lines throughout. Andy’s optimism is absolutely contagious!

And, we are sure most of you might connect with this very quote from popular sports drama starring Sylvester Stallone.

3. “Oh yes, the past can hurt. but from the way I see it, you can either run from it or learn from it.”
–Rafiki, The Lion King 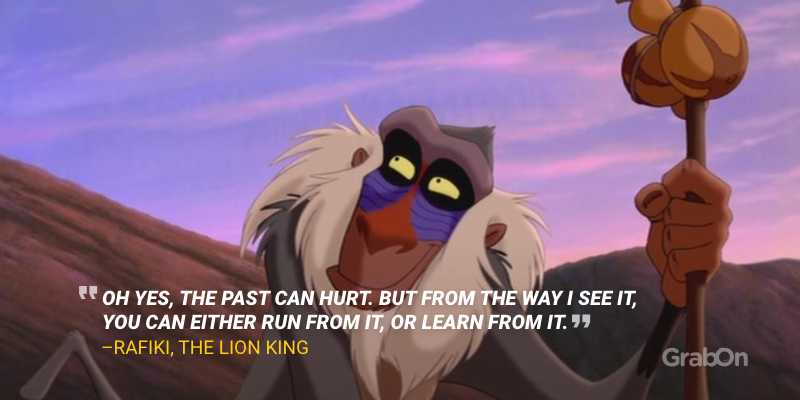 If you did not watch The Lion King while growing up, you probably did not have a great childhood! Rafiki is pretty wise for a baboon, right?

4. “Being brave doesn’t mean you go looking for trouble.”
–Mufasa, The Lion King Another great quote from The Lion King. Here, Mufasa’s telling his son the difference between an idiot and a brave lion. Applies to humans as well though!

5. “We all want to help one another. Human beings are like that. We want to live by each other’s happiness, not by each other’s misery.”
– Charlie Chaplin, The Great Dictator

And here comes the most remarkable quote from Charlie Chaplin’s first film with dialogue. 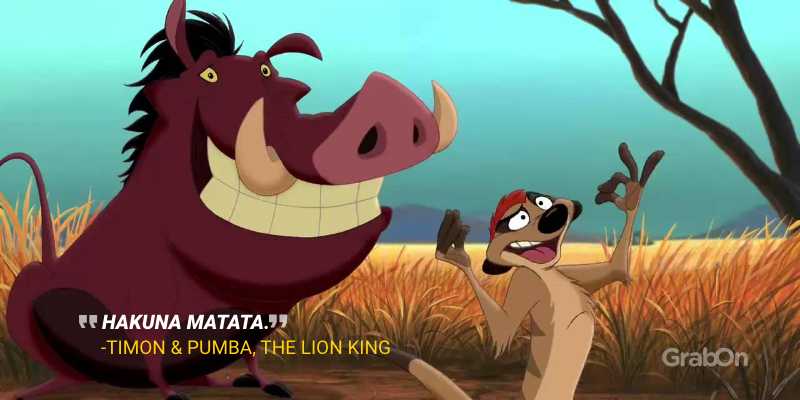 It means no worry, for the rest of your days. It’s a problem-free philosophy! Well, at least that’s what Timon & Pumba told us!

7. “Yesterday is history. Tomorrow is a mystery, but today is a gift! that is why it is called the present.”
-Oogway, Kung Fu Panda 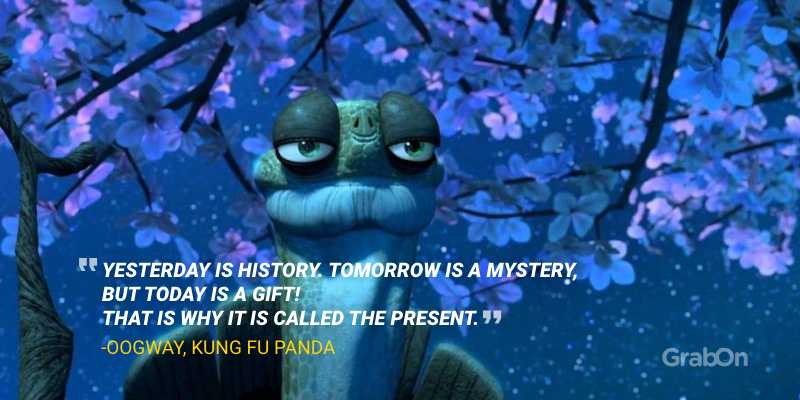 Oogway the wise told us the most important lesson of how you can live your without any worry and freely. And it is very important to remember that every day is indeed a gift! This iconic quote is self-explanatory and also true. There is no need to follow what everyone feels is right for you. Make your lives extraordinary and seize it by the throat! 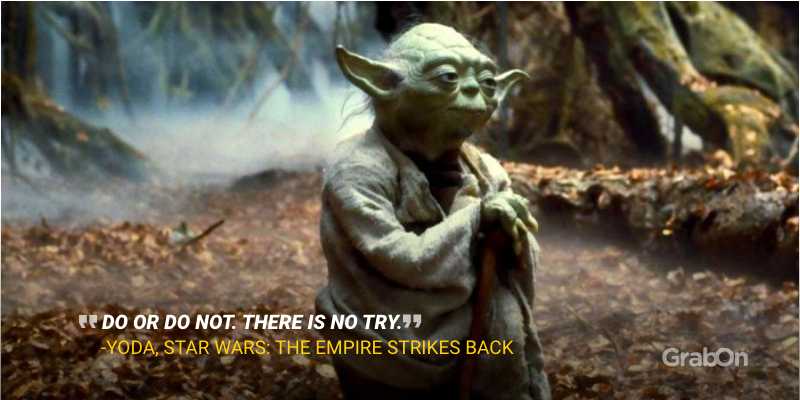 Ask any Star Wars fan about this quote and they will pay tribute to their original master. Yoda, the wise, was full of wisdom, evidently. 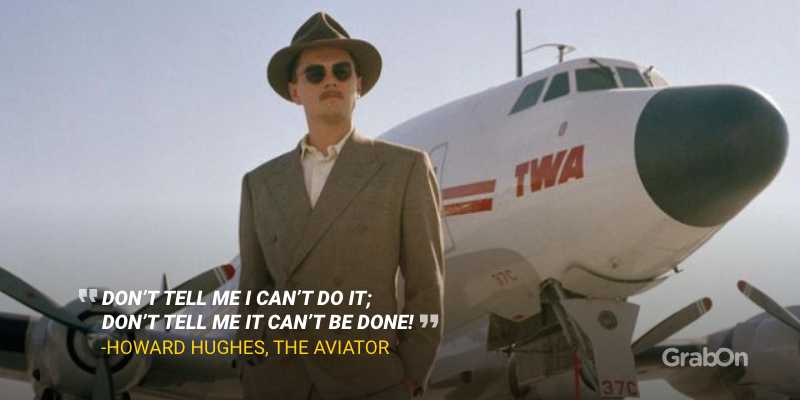 Your official motto before every task you undertake, we presume? Go out there and fight the world you champ you! 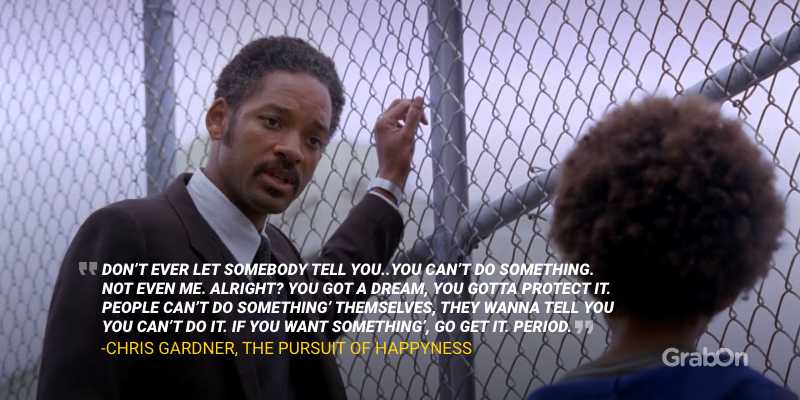 No one can deliver this passion except Will Smith. And we urge you to comply with this bit of advice. Don’t ever let people discourage you or get the better of your insecurities.

12. “What we do in life, echoes in eternity.”
-Maximus, The Gladiator 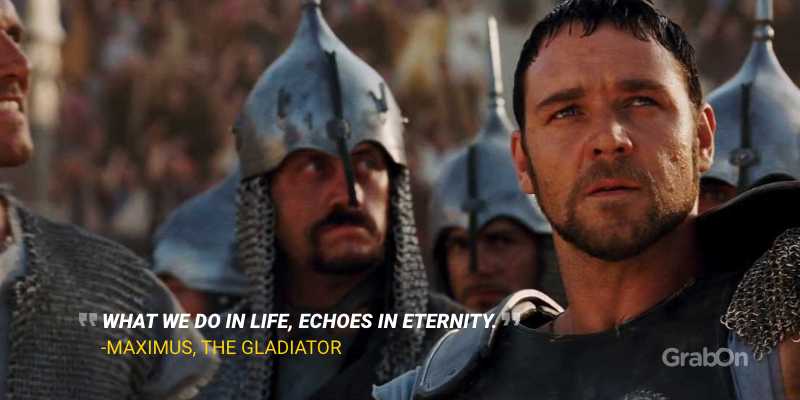 History is written by the victors, so, you cannot afford to lose. Do your best and let your actions speak loud. 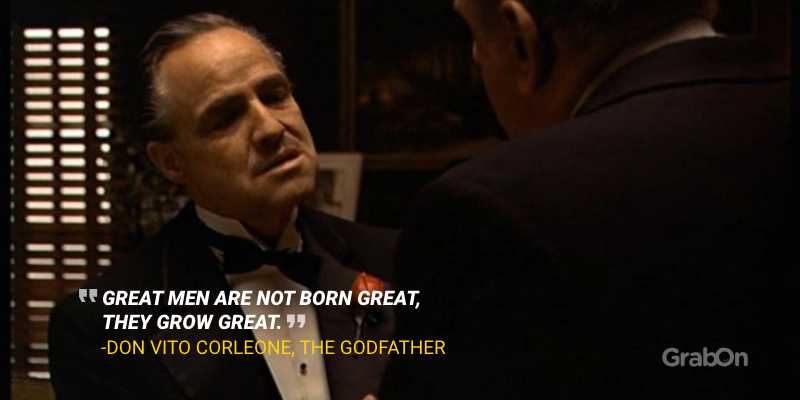 Can’t grow up without a bit of hustling now, can we? It doesn’t matter where you come from. It matters what you do with what you have.

Time for the most fabulous dialogue from everyone’s favourite ‘Iron Man’. 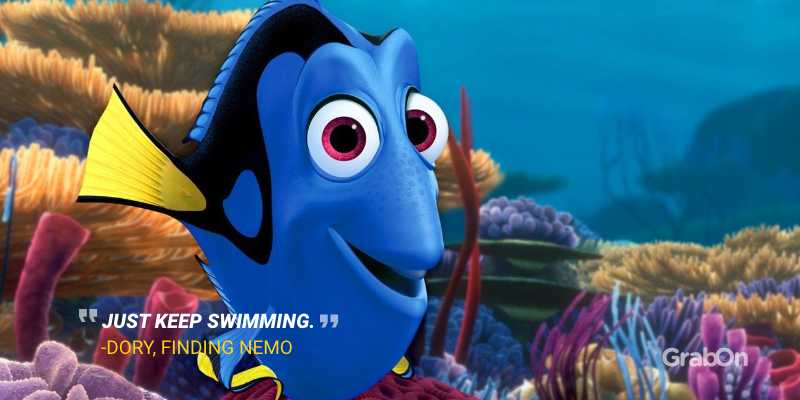 Don’t let obstacles restrict your dreams. Keep swimming and don’t ever give up.  Giving up is the first sign of losing.

16. “Every man dies, but not every man really lives.”
-William Wallace, Braveheart 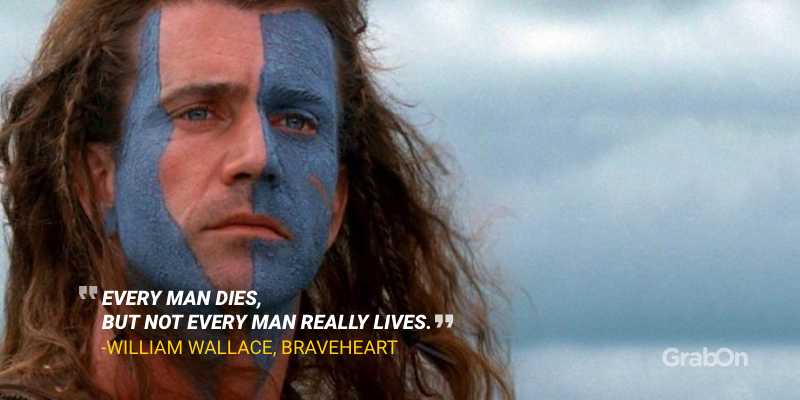 Don’t just exist. Live; as a memory and through your actions. Feel the energy all around you. The best boxer in the world is life. And unluckily, it meant the best fighter in this universe: you! Don’t quit. Get up, brush yourself and get into the ring!

18. “The flower that blooms in adversity is the most rare and beautiful of all.”
-The Emperor, Mulan 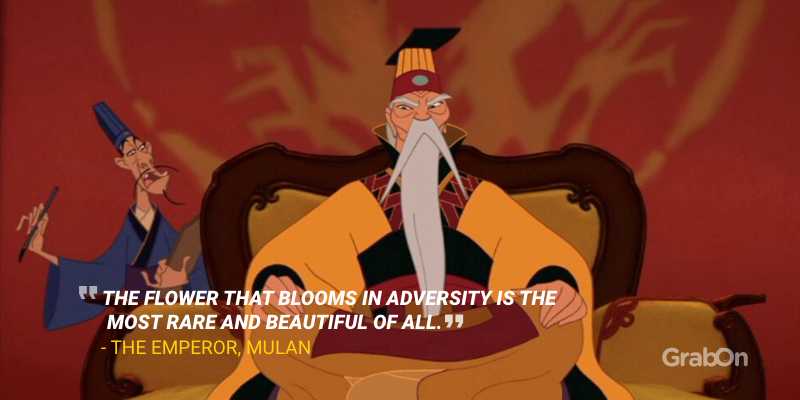 Legends are not born, they are forged. Especially in the harshest climates.

19. “There’s some good in this world, Mr. Frodo, and it’s worth fighting for.”
-Sam, The Lord Of The Rings: The Two Towers 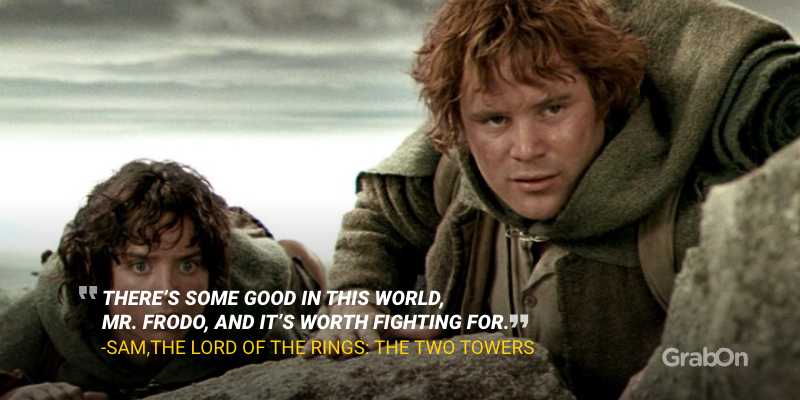 Sam did not let evil win that day and neither should you. Be it insecurities, a setback or any shape that evil takes, it must not win!

20. “In this lifetime, you don’t have to prove nothing to nobody, except yourself. And after what you’ve gone through, if you haven’t done that by now, it ain’t gonna never happen.”
-Fortune, Rudy Nothing made more sense than this quote. The only competitor you ever need to beat is yourself. Don’t compare yourself to others and you don’t need to prove anything to anyone.

21. “You mustn’t be afraid to dream up little bigger, darling.”
– Tom Hardy, Inception

How can we miss this stellar dialogue from Christopher Nolan’s master piece ‘Inception’? And, isn’t this quote very true on point? One should never be afraid to dream his/her heart out, afterall, we only live once!

22. “No one ever made a difference by being like everybody else.”
-P.T. Barnum, The Greatest Showman 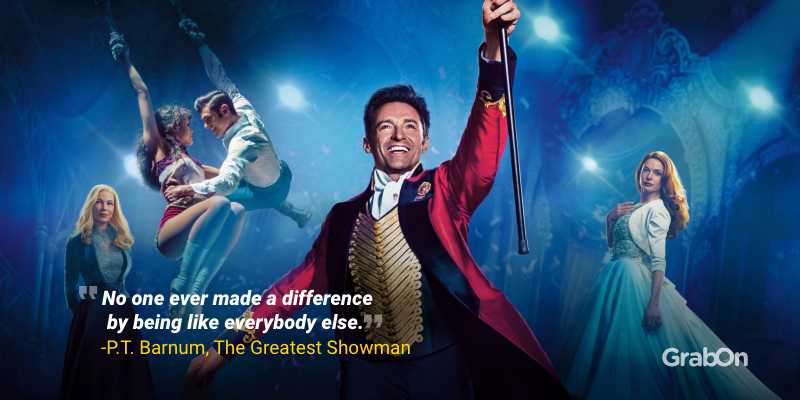 Take any revolutionary figure as an example and you will know how true this is! You cannot be part of the crowd if you want to stand out.

23. “Happiness can be found, even in the darkest of times, if one only remembers to turn on the light.”
-Dumbledore, Harry Potter And The Prisoner Of Azkaban 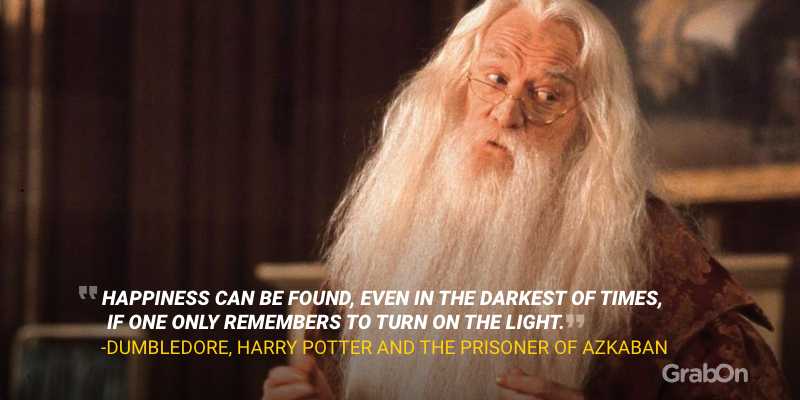 Darkness cannot vanquish light, no matter how deep the tunnel. At one point, you will always find light and that is all you need to find your way out.

24. “The only thing standing between you and your goal is the bullshit story you keep telling yourself as to why you can’t achieve it.”
-Jordan Belfort, The Wolf Of Wall Street 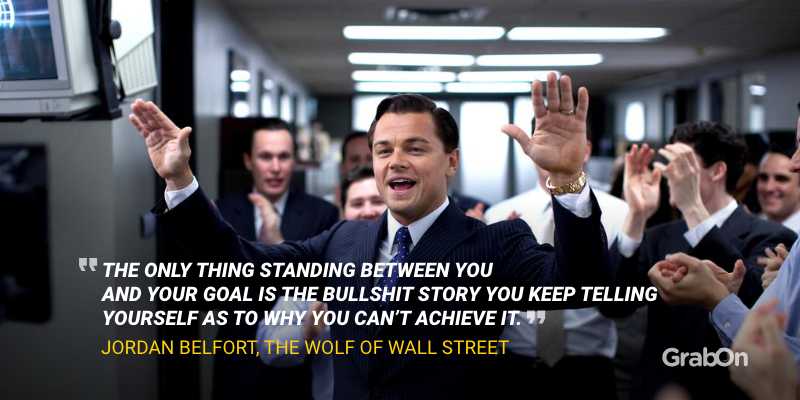 No kidding. Don’t give up because you have a minor set-back. And don’t give up exaggerating a minor detail and blowing it out of proportion. Tell your mind that you can do it too!

25. “Why do we fall, Bruce? So we can learn to pick ourselves up.”
-Thomas Wayne, Batman Begins 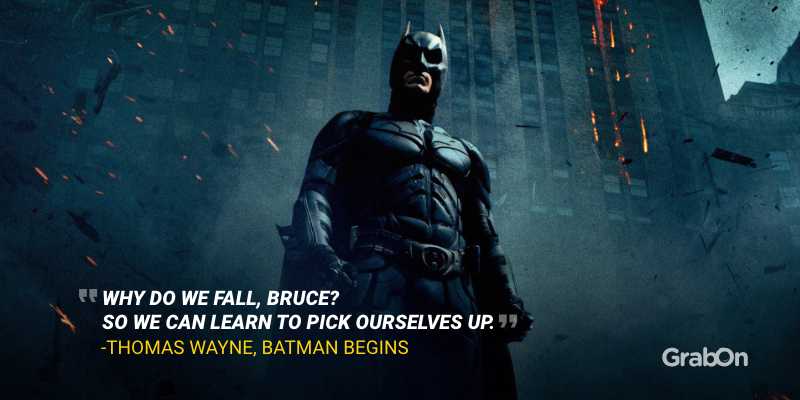 Before Batman became Batman, he was just a boy. And the reason why this boy never gave up fighting for his city is because his dad taught him how not to!

If you have any other or better in mind, don’t forget to put it up in the comments section! There is a lot of inspiration to be found everywhere around us!

Top Instagram Travel Accounts Killing It on the Internet

Demonetisation Anniversary – Summed Up By The Simpsons In 5 GIFs

Top 10 Tips To Save Money On Fuel